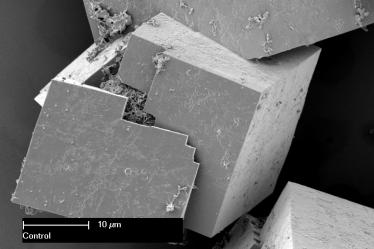 Although hydrogen-powered vehicles are a cleaner alternative to fossil-fuel-based transportation, commercialization of hydrogen cars is only possible if more efficient hydrogen-storage systems are developed. In this report, researchers have utilized metal-organic frameworks (MOFs) to develop hydrogen storage capacity under normal operating conditions.

Improved hydrogen storage systems will help in increasing the driving range of the automobiles and reduce the cost. Expensive, bulky cooling or compression systems are used in currently used hydrogen-powered vehicles to store enough hydrogen for acceptable driving ranges. MOFs are compounds that contain metal ions coordinated to organic ligands. The 3D structures of some MOFs form pores, which can adsorb molecules of hydrogen gas. This allows them to attract other molecules, which could allow the gas to condense under near-ambient conditions.

Researchers tested four different compounds for determining the best MOF for hydrogen storage. Among the four compounds, two compounds had nickel as the coordinating metal, and for the other two compounds, cobalt was the coordinating metal. A MOF called Ni2(m-dobdc) showed the highest hydrogen-storage capacity over a range of pressures and temperatures. At ambient temperature and a much lower tank pressure than used in current hydrogen vehicles, Ni2(m-dobdc) set a new record for hydrogen storage capacity of 11.9 g of fuel per liter of MOF crystal.

Furthermore, the structure of the MOF was examined by the researchers by using neutron diffraction. They found that seven specific binding sites for hydrogen gas were present in a single pore. This enabled dense packing of the fuel.